Movement is a very important component in the treatment of painful problems.

It makes sense that if someone has a movement problem that movement will be key to their recovery.

It can seem sensible, especially when the pain seemed to originate with a particular movement or activity, and many a well-meaning provider is all too happy to help a person identify them. But let me tell you that one of my biggest frustrations is when I get people who have become scared of movements and actively avoid them because they’ve been told to!

“My PT said that my lumbar degenerative disc disease is probably related to all of the bending that I’ve done in my life. So, now I avoid bending whenever I can.”

This, folks, is avoidant behavior, one of the biggest indicators of poor prognosis, that was ENCOURAGED by something a person was told.

We can do better than this. Much better!

It can be tempting to separate the things we do into divisions such as manual therapy, education, exercise, motor control movements, etc.

Certainly there are plenty of examples out there of “making sure to include education into your treatment.”

I would submit that you can’t avoid educating your patient even if you try.

“He looked concerned and started taking notes when I mentioned my old auto accident. That must be important!”

Our tests, screens and the way we react to the findings provides education. When we apply our hands to the patient we are educating them about their condition.

“He looked at my spine and when he pushed on it I noticed stiffness.”

Movement is no different.

When we discourage certain movements we are sending a message that those movements are a threat and may create harm. When we encourage other movements, we are providing education as to what may be “good” or “helpful.”

Sometimes this may be appropriate but we must be careful because, if on one hand we tell the patient that “pain is an output of the brain” and that their problem is not explained by an orthopedic “issue in the tissue” but then on the other hand dispense movements based on tissue strain principles then we are sending a mixed message.

Or, worse we may be sending a consistent message of threat that implies fragility.

Be careful of passing on themes of fragility through movement programs.

Use movement as a way to demonstrate resilience, build confidence, and regain lost territory of function.

People Don’t Look For Explanations, They Look For Confirmation

If we are going to educate and communicate with people effectively we need to have some understanding of behavior.

One of the most important aspects of human behavior that we must always keep in mind is called confirmation bias.

It is the tendency to look for things that support the position that we already hold and we ALL do it.

What this means for us is that people 1) tend to come in with some idea of the problem already and 2) are looking for confirmation of this idea.

This is scary for us because it means that these messages of fragility may be getting passed on without our even knowing it! You may have no intention of passing on the “poor posture” message, but they may find validation in something you’ve said or done anyway!

Beyond this is another related behavior known as the backfire effect.

If you try to talk someone out of a position that they already hold it is very likely that it will only cause them to entrench in the very belief you are trying to discourage.

This means that if you were to make the effort to tell your patient the many reasons why their pain likely has nothing to do with their posture, there is a very good chance that this will only make them even more confident in their notion of the poor posture problem!

C’mon now! What are we to do?! We need to take a third road.

One form of learning that is currently thought to be one of the more powerful mechanisms behind the success of exposure based approaches is that of inhibitory learning (here and here).

Think of someone who has a fear of being bitten by a dog.

Evidence indicates the outcomes that drive lasting change are those that are unexpected.

It appears that the more surprising the result, the bigger the effect. When a person is confronted with a surprising result, they no longer look for a confirmation but instead look for an explanation. This is good timing to apply verbal education.

We can easily apply this principle to movement.

When they can demonstrate to themselves resilience they did not expect, the surprising result offers an opportunity to refute the notion of fragility.

Reassurance Is One Of Our Most Powerful Allies

Why is this so important?

What is often implied in our approaches, either implicitly or explicitly, is that pain is never normal.

This is just not true. Pain happens and has a role.

The average person will experience a memorable bout of back pain every 1-2 years (here, here, here, and here).

When we imply that the presence of pain is by default abnormal we may validate the presence of threat implying that something is wrong. Pain appears to be based on the perception of bodily threat. So, in that case, when our treatments work it is likely through a process of convincing that the threat has been removed or resolved.

In certain cases, like fractures and lacerations, that is certainly appropriate.

However, in the absence of a true threat, we should be careful about potentially validating the abnormality of pain.

Encouraging the avoidance of certain movements can drive fear and confirm that scary things exist along that continuum of movement.

This gives us a valuable role in re-assurance.

What is typical and expected? What would we see if this were something more concerning? 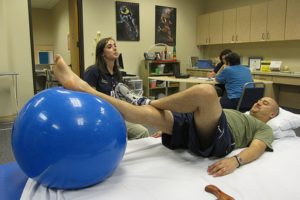 Consider Yourself In The Role Of Contextual Architect

I have long considered that my primary role as a physical therapist is to set up scenarios in which people can come to certain conclusions.

We are architects of the context in which change occurs, at best (here). We are not responsible for the change itself, only the patient can bring change.

This is why I am no fan of the descriptors of “healers” and “fixers.”

We can set up and progress “experiments” which can refute fragility and encourage resilience. We can use movement in the form of exposures to first disconfirm the limitation and then use graded activities in varying contexts to consolidate and strengthen the disconfirmation.

It becomes a form of confidence building.

So, be mindful of the messages being sent by your interactions. Be aware that your patient is looking for any signs to confirm their worst fears, even if you are not purposefully sending that message.

Use your understanding to set up experiments in which they can demonstrate to themselves a surprising resilience.

When it occurs be ready for the opportunity to explain it. But…

Be Mindful Of The “Safety Signal”

Returning to the dog bite fear scenario, there are a few different ways that we could set up the experiment so as to bring about the surprising outcome.

But, not all options are equally good.

For example, we could put the dog on a chain. Or we could give the person a shield or a taser or something to use to defend themselves. We could stand there with them providing assurance that if the dog were to attack we would stop it.

These are examples of what are known as “safety signals.”

The safety or lack of the feared result is credited to something other than themselves: the chain, the defense, or the helper person. While these things may serve to give the person a sense of safety, it may not be a sense of safety that they will feel they brought about for themselves.

So it is not likely to last because it only serves to confirm that the threat was real in the first place.

In the case of movement treatments, we need to be mindful of this as well.

Did they feel that they navigated the steps successfully, or did they they do it because of the tape they were wearing protected them?

Were they able to successfully work in their garden or was it just because someone had “fixed their alignment.”

Again, look for opportunities to portray themes of resilience, not fragility and vulnerability.